Direct-to-garment printers blur the lines between commercial and industrial

If you’ve been paying attention to some of this year’s new DTG printer launches, you may have noticed that the traditional gap between commercial and industrial printers seems to be closing. Today’s DTG devices offer faster print speeds, better print accuracy, and more advanced technologies, all with a smaller footprint and lower price. This article offers a brief overview of devices that blur the lines between commercial and industrial printers.

Many apparel designers have seen the direct-to-garment (DTG) part of their business grow in recent years. Today, some of those same businesses are faced with the need to purchase additional printers in order to keep up with demand. While those who own commercial printers may be frustrated with their slower-than-average print speeds, businesses who own industrial printers may complain of a lack of redundancy or production downtime caused by performance issues. machine. Historically, DTG devices have been divided into the following segments based on their maximum print speeds.

If you’ve been paying attention to some of this year’s new DTG printer launches, you may have noticed that the traditional gap between commercial and industrial printers seems to be closing. Today’s DTG devices offer faster print speeds, better print accuracy, and more advanced technologies, all with a smaller footprint and lower price. These new devices are blurring the lines between commercial and industrial printers.

In January 2022, Brother International launched its GTX600 industrial direct to garment printer. This device includes new features like a projector system that automatically projects the design to be printed on its intended position, allowing the user to see the design as it will appear on the garment before printing to avoid errors printing. Brother’s Digital Line all-in-one preprocessing system can be paired with one or more GTX600 printers and conveyor dryers to maximize workflow efficiency. The system is available in two options:

Both options combine pre-treatment, drying and pre-pressing processes in one machine. Using three GTX600 printers, a digital inline pre-processing system and a conveyor dryer, the system can produce up to 182 garments per hour. Brother is a forerunner in promoting the “pod” concept, which combines multiple DTG printers, automatic pre-processing and a dryer. 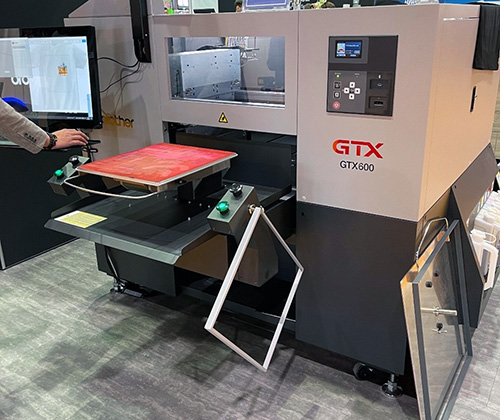 In April 2022, Aeoon Technologies launched his MAIKURO peripheral, which is a small two-platen DTG machine that can print up to 65 garments per hour. The printer uses eight Ricoh Gen5 printheads that project images at 600 dpi with a maximum image size of 40cm x 45cm (16in x 18in). The MAIKURO is a single gantry printer and, like this video watch, each plate is first printed with the white undercoat followed by the color pass. While the device produces slower print speeds than the other products discussed in this article, Aeoon classifies the MAIKURO as an industrial DTG printer. This classification is somewhat misleading given the hourly production rate – at 65 dark garments per hour, the MAIKURO is really more of a high-end commercial or entry-level industrial printer.

DTG Digital (a subsidiary of Pigment, Inc.) has spent the past two years developing its new Q2 DTG printer. This device is configured for hybrid capability allowing direct-to-finished garment printing as well as direct-to-film transfers on a single platform. The Q2 offers industrial-grade production speeds of 100 dark garments and 150 light garments per hour and has a footprint of just 1006mm x 1400mm x 1931mm (42in x 55in x 76in). The printer also incorporates robust features such as a linear motion platen carriage guide with automatic height adjustment, two-stage ink mist extraction, and an array of four offset printheads. A unique aspect of the Q2 is simultaneous printing of both trays.

Ser. Tech. SRL offer the Eagle TX S, which can print up to 120 garments per hour. This device can be configured with two, three, or four printheads and features printhead position control that automatically adjusts printhead height based on garment thickness to avoid headbutts. The Eagle TX S can also print materials up to 15cm thick. A unique feature of this printer is the multiple dual tray configuration. As seen in this videothe circular workflow allows continuous loading and printing simultaneously.

As improvements continue in all segments of the DTG market, recent developments point to more advanced/ruggedized commercial DTG printers and smaller but more powerful industrial DTG printers. The lines between these segments are certainly blurring, so today’s businesses have a wider range of options than ever before. The requirement for “high productivity” no longer means investing $250,000 or more for an industrial-grade DTG printer. Using the “pod” concept championed by companies like Brother, multiple printers can be grouped together to produce volumes that have historically been associated with more expensive industrial DTG printers. In the past, companies might have been hesitant to invest such a large amount of money in a single printer that might stop for one reason or another. This is precisely what makes the pod concept so appealing.

Johnny Shell is the Director of Functional and Industrial Printing Consulting at Keypoint Intelligence. He is a printing expert and recognized leader with over 35 years of experience in the printing industry. Johnny is inducted into the Academy of Screen and Digital Printing Technologies, an international body of experts that honors qualified individuals through the election of members for their distinguished and long-term contributions to the application and promotion of screen and digital printing and associated imagery. technologies for graphic, textile, industrial and electronic printing applications.

The apparel industry’s local sourcing rate is on the rise, but challenges lie ahead

The market for portable garment steamers is booming

Direct to Garment Printing Market Expected to Surpass US Dollar